You might remember a post I made last year in the early days of this blog about an amazing weekend that I had with my little cousins. Sibs Weekend. The 2012 Sibs Weekend was a couple of weeks ago and it was even more fun than last year's. The girls got to stay in my apartment this time, which they thought was the coolest thing ever.

I picked the girls up on a Friday night and we headed straight to see a magic show. Let me just tell you that it was amazing. I have no clue how he did those tricks. Of course we had to take a picture before it started. Tradition, ya know? 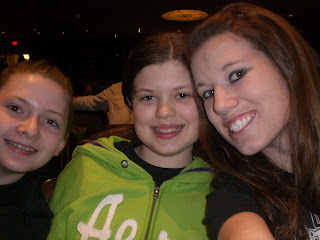 Then we headed back to my apartment for some pizza and Wii. They completely put me to shame on Just Dance 2. Like domitated. But they had a blast.
﻿ 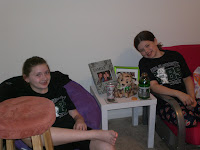 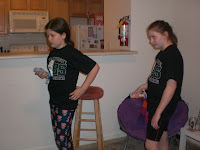 The next morning, Riley had to be up early for ice skating, so after she left, Mary Kate and I took a long walk around campus. It was so, so, so nice. I hardly ever get to see my girls anymore because we're all so busy, so it was nice to just have some time to talk with her and catch up. We spent forever sitting by the pond watching a little groundhog scurry in and out of his burrow. Simple things are the best things :)
Then we got Riley back and it was off to lunch at Applebees. Yum. 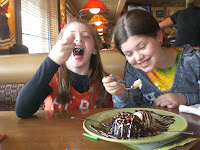 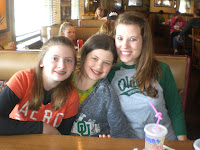 After lunch, Mary Kate had to leave for her basketball game (I told you we're busy!) so Riley and I headed off to the student rec center for some bouncy house fun. Last year this was one of their favorite parts. We bounced, climbed and slip slided for two whole hours. See the 2nd picture? That's my girl going up the rock wall. She did SO good and I couldn't have been prouder.
﻿
﻿ 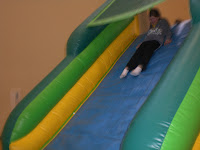 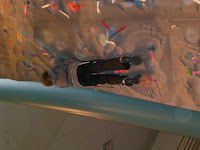 Please excuse the poor photo quality. I had my flash on soft and didn't realize it until the end of the day. Boo.
We left RecFest a little early so that we could be back at the apartment to meet Mary Kate, whose basketball game had just finished up. We got her back and headed up town for some pregame Subway. Sidenote: I just started eating Subway a few months ago. I'm not exactly what you'd call an adventerous eater. But now it's one of my favorites. 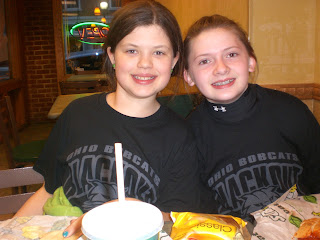 After we ate, it was time for the game. As a special bonus, it was a Blackout game. Hence the shirts. The girls had a blast and thought it was so cool that we got to sit in the student section right by the band. Of course we had to get a picture with Rufus when he walked by. Did I mention that we have the coolest mascot ever? And we won the game which was the cherry on top of a perfect night.
﻿
﻿ 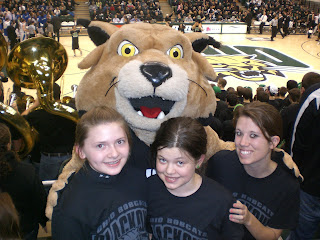 That was supposed to be it. Our night was set to end after the game ended. But as we were walking back, we saw posters advertising a carnival in the student center. With bumper cars. Yes, bumper cars. Inside. Of course we HAD to check it out. It turned out to be one of the coolest things ever. The line for bumper cars was long but so worth it. See? And as my own special form of payback for beating me at Just Dance, I completely DOMINATED on the bumper cars. Ha. 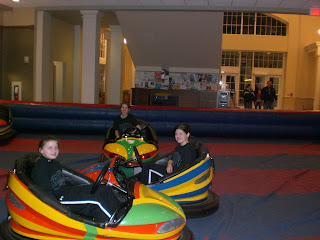 Another fun activity that we found was the horse race. There were three large plush horses. You sit on them and literally buck up and down to make them go forward. It may look childish but, oh man, was it fun. Notice that I am on the unicorn. I dibsed it before we even got in line. 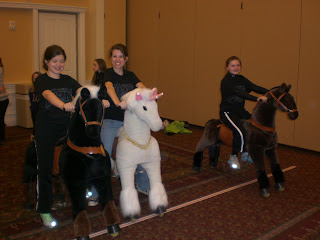 After a very intense race, we grabbed some of the free popocorn that they had and headed back to my apartment to gather their things, then I took them home.
No longer little kids, my 10 and 11 year old girls are the sisters I always begged for but never had. They are my rocks, my sunshines, my world. I am so, so, SO proud of the beautiful and intelligent young women that they are turning out to be. ﻿
﻿
﻿
Posted by Ainsley at 10:10 AM