Two Steps Forward, Lots of Steps Back, and One Tiny Glimmer of Hope

I've had this post floating around in my head for a while now. I just didn't put it into writing because I kept thinking things would change (they haven't).

How is straw bale gardening going for me? Well, it isn't exactly "going". Remember the little sprouts that I mentioned in THIS post? They're gone now. Both of them. As is the tomato sprout that appeared a few days after writing that post. I think that something ate the seed from the melon sprout, because the straw around where I put it is all ripped apart as if it has been dug through. The green bean sprout died, and then some fungi started growing out of the hole it was in. Yuck!

I tried to do it all right. I watered them on days that we had no rain. If it rained (which has been often), I just let nature be the watering can for that day. I think that the problem(s) may be one or more of the following:
I don't think this project is going to work after all. It's ok, though. I want to try again next year. Does anyone have any tips that I can try for next summer's garden? I'd love to hear how your bales are coming!

Amid all of this, there is still one little glimmer of hope. A tiny little melon sprout (nope, not the same one that I saw in THIS post). It is still hanging on. Still standing straight and growing slowly but surely. I think that this little melon sprout can be a life inspiration. Even when everything around you is going wrong, never give up hope, and never stop holding your head high. 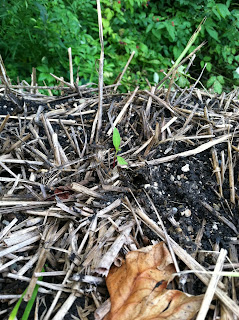