This weekend was Sibs Weekend at my college. I don't have any siblings, but I do have two beautiful, smart and amazing cousins (Mary Kate and Riley) who are the little sisters I never had. They're my best friends. My life would be nothing without them. 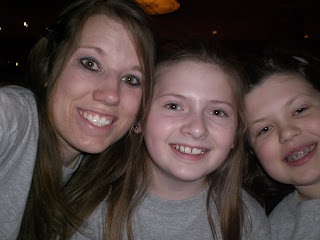 On Friday night after work, I picked them up and we went to watch Cirque Shanghai: Bai Xi. It is a Chinese acrobatics show. Very, very talented people! Riley kept asking me if they had spines. Both girls were mesmorized by the show. After it was over, we walked into the theater lobby and all of the acrobats were standing there with pens. The girls immediately pulled some paper out of their bags and got in line. They were so starstruck. After we had left, they just kept saying "I can't believe we actually got their autographs". They were more excited about the autographs than the show itself. 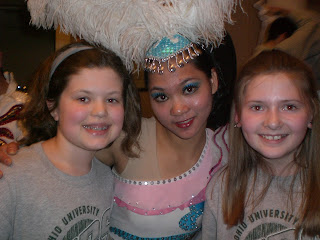 Then, I took them to Wendys. Being in a college town, it has very late hours. I bought them Frosties and we dipped our fries in them while watching YouTube on my iPhone. When we were walking out, there was a street performer playing an accordian. We listened to him for a while. Then, as we were walking back to my car, the girls thought they saw a creepy dude staring at us. So we took off on a dead sprint across the Green. We made it back to my car just fine, no worries. ;)
Then we went back to my house and I gave them their presents. I filled zebra print gift bags with a Webkinz, a pack of Silly Bandz, a Smencil (scented pencil) and a precious frame that says "This Day Rocked" with a picture of us in it. They loved it. I love making them smile!
The girls played on my computer for a while and then we played Wii. Mario Kart and Just Dance. They gave me quite the beating in Mario Kart.
Around midnight, I put on a movie for them and soon they were asleep.
Fast forward several hours to Saturday morning. When we woke up, I put some cartoons on for them. I remember how awesome the Saturday cartoons were when I was a kid. They were actually worth waking up early for. Today's cartoons, ehh not so much. So they watched cartoons for about an hour and then my daddy made us the most amazing breakfast. French toast, pancakes and bacon. Yum.
Then, it was time for the crown jewel. The part that the girls were looking forward to the most. The SPA! I had originally planned for the spa to be a huge deal with lots and lots of activities, but I was sick all week so I didn't really get to plan much. So I had to make do with what we had. The girls played with my cat, Bella (who you will meet and see pictures of in an upcoming post) while I set it up. We had three stations. 1) Bubbling and vibrating foot tub with bath salts mixed in and magazines to read; 2) Back massages, which I like to think I am very good at giving; and 3) Manicures and Pedicures including yummy smelling hand cream, a hand massage and crazy colored polish. I had one girl sit at the first station while I did stations two and three with the other, and then we switched. They loved it and I loved doing it for them.
Next was lunch at Burger King. I gave them an hour to play in the play area. They kept hiding from me and whenever I looked up at the play structure, I would hear one of them scream "Dang it" which was immediately followed by footsteps as they tried to find a new hiding spot. If there hadn't been so many people there, I probably would have climbed up in there with them. ;) 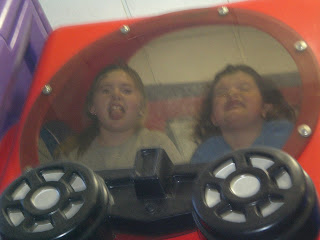 After a hearty dose of chicken nuggets, we packed into the car again for our final activity. I drove them back to my college and we went to the student recreation center where they had planned a full day of activities just for sibs! They had inflatables like an obstacle course, slides, bouncy castles, jousting and a Velcro covered wall that you could jump onto (after putting on a special Velcro suit, of course). 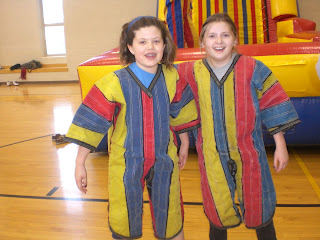 They also had plenty of food. They had board games sitting out too, and we played several hands of Uno with some other students. Then we got in line for airbrush tattoos. Apparantly everyone else had the same idea because we waited in line for almost an hour. We took pictures, played games and talked to pass the time. When it was finally our turn, Mary Kate got a tiger, Riley got a panda and I got a peace sign. It is still on my arm.
As our fun day came to a close, I loaded two tired tweens back into the car and took them home. This was the best weekend I've had in quite some time. They were so appreciative of everything I did for them. I love spending time with them and making them happy. I may not have gotten the sister I begged for, but I ended up with something even better. I love my cousins!
Posted by Ainsley at 4:12 PM