Between work and school, I'm usually really busy, but when I have some extra time, I like to decorate cakes. Today I'm going to share with you two cakes that I have made and how I did them.

The first cake is based on The Twilight Saga, one of my favorite book series. To make it, first I baked my favorite cake from a mix in a 9x13 cake pan. Then, I mixed vanilla icing with black icing color. This is different than regular food coloring. It comes in a tiny jar and is thicker. I get mine from Wilton. It took a good bit of coloring to get the shade I wanted. It kept coming out purple until I added enough. When I liked the color, I iced the entire cake (after it cooled completely, of course). Then, I piped on the details with icing bags. I tried to make my cake designs look like the images that are on the covers of the books. For the apple, I piped an apple shape and filled in the center with more red icing. Then I added red sprinkles to make it shiny. For the flower, I piped the main part with white icing. I found that the quicker I moved my hand, the more "real" the flower looked. It made it look more flowy, I think. Then, for the red tips, I hand placed red sprinkles where I wanted them. For the ribbon, I piped a squiggly line and filled it in until it was as thick as I wanted it. Don't forget the fringe on the ends! Finally, for the chess pieces, I piped the shapes (I practiced these ones on paper first) and filled them in with more red and white icing. Then, I wrote the word Twilight and added some stars. This was a very fun and simple cake to make and I couldn't believe it actually turned out! 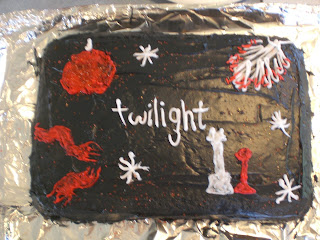 The second cake I made was for a Christmas party that we had at work. This one was tougher to do because of the unique shape. First, I took a sheet of paper and drew with a pencil the areas that I wanted to be cut off of the cake. This helped me to get the proportions right. Then, I cut the actual cake. Let me tell you that when in doubt, cut less. You can always cut more off later if it is too large, but trying to add back more cake that has already been removed is so much harder. I cut out the shape of the sleigh first. The pieces that I cut off were put aside to be used later. Then I iced the sleigh. To get the red color, I used the same type of Wilton icing color that I mentioned using in the Twilight cake. Then, for the runner, I took the large piece that had originally been in the cake's top right corner and started cutitng. Getting the right shape was hard because I kept cutting too much and sometimes pieces just fell off or crumbled. Once I liked the shape, I attached it to the sleigh with more icing. Then, I iced the runner. That was incredibly hard because it made the runner crumble even more. I just kept adding more and more icing until it was basically like glue holding the crumbles together. It ended up looking ok after all. Then, I used squeze tube (not bags this time) icing with decorator tips. I used a thin line for the words, and a leaf shape for the holly leaves. Then, I thought my cake was done, but after looking at the amount of leftover cake I still had, I realized that the sleigh alone may not feed everyone. So I iced more cake to look like a gift and stuck it on. This cake is not the most attractive thing in the world, but I felt good about it considering it was the first "shaped" cake I did. Everyone at my work seemed to love it. 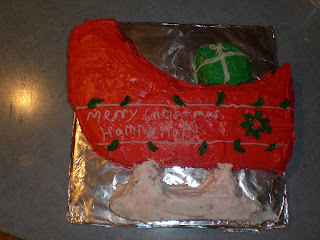 Have you made any cook cakes lately? Feel free to tell me about them in the comments section! Thanks for reading!﻿
﻿
Posted by Ainsley at 4:20 PM